On this site, I will show my process and contents for my website I have created for my chosen artist; Mobb Deep.
It is a website about re-releasing their famous album, The infamous, which came out in 1995.

As golden age rap suddenly gave way to West Coast gangsta in the early '90s, an East Coast variety of hardcore rap arose in turn, with Mobb Deep initially standing tall as one of New York's hardcore figureheads on the basis of their epochal album The Infamous. Released in April 1995, The Infamous was released almost exactly a year after Illmaticand about a half year after Ready to Die -- the debut masterpieces ofNas and the Notorious B.I.G., respectively, both albums likewise of momentous significance for East Coast hardcore rap. On The Infamous, Mobb Deep (comprised of Prodigy and Havoc) set the tone for future generations of hardcore New York rappers, from G-Unit toDipset. Subsequent releases from the duo were likewise influential, especially Hell on Earth (1996). However, by the late '90s, Mobb Deep was no longer setting trends; in fact, they seemed to be following them, and they lost some of their stature as subsequent generations of hardcore rappers arose. For a few years, Mobb Deep struggled to reclaim their commercial standing, until they eventually drifted into theG-Unit camp, where they signed a lucrative deal to join 50 Cent and company. Blood Money (2006),Mobb Deep's first release under the G-Unit banner, rekindled interest in the veteran duo, who enjoyed a substantial uptick in sales and airplay.


Prodigy (Albert Johnson, born November 2, 1974) and Havoc (Kejuan Muchita, born May 21, 1974) grew up in Queens, specifically the Queensbridge area, yet met in Manhattan, where both were students at Graphic Arts High School. Their shared love of hip-hop resulted in a natural companionship, and while they were still teens, the two young men had themselves a record deal with 4th & Broadway, a major rap label affiliated with Island Records. In 1993, the label released Juvenile Hell, a confrontational album featuring noteworthy production work byDJ Premier and Large Professor, who both within a year's time would move on to produce the debut of another young Queensbridge rapper,Nas. Not much came of Juvenile Hell, however, and it would be two more years before Mobb Deep would return.


When they did return in 1995, it was on a different label, Loud Records, and with a significantly developed approach. The Infamous featured a mammoth street anthem, "Shook Ones, Pt. 2," but it was a solid album all around, featuring also the in-house production work of Havoc and a couple high-profile features (Nas, Raekwon). The Infamous was more hardcore than its two key stylistic predecessors, Illmatic and Ready to Die; the beats were darker and harder-hitting while the rhymes were downright threatening yet still inventive and crafty. Moreover, there were no crossover hits like "Big Poppa" or "Juicy." In fact, there were no light moments at all. The Infamous was an uncompromising album for the streets, and it was championed as such. 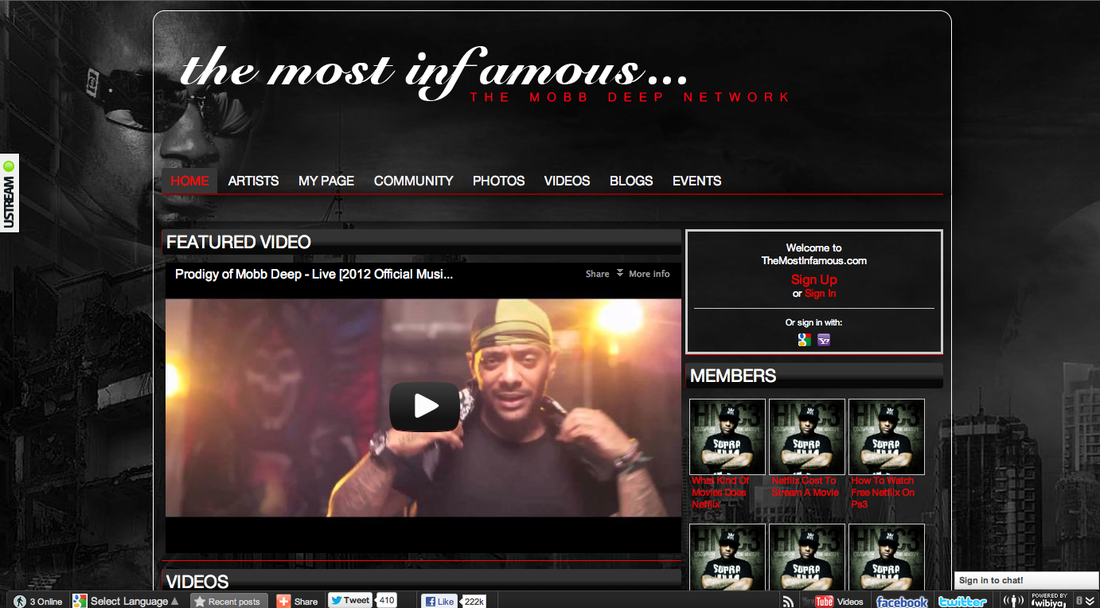 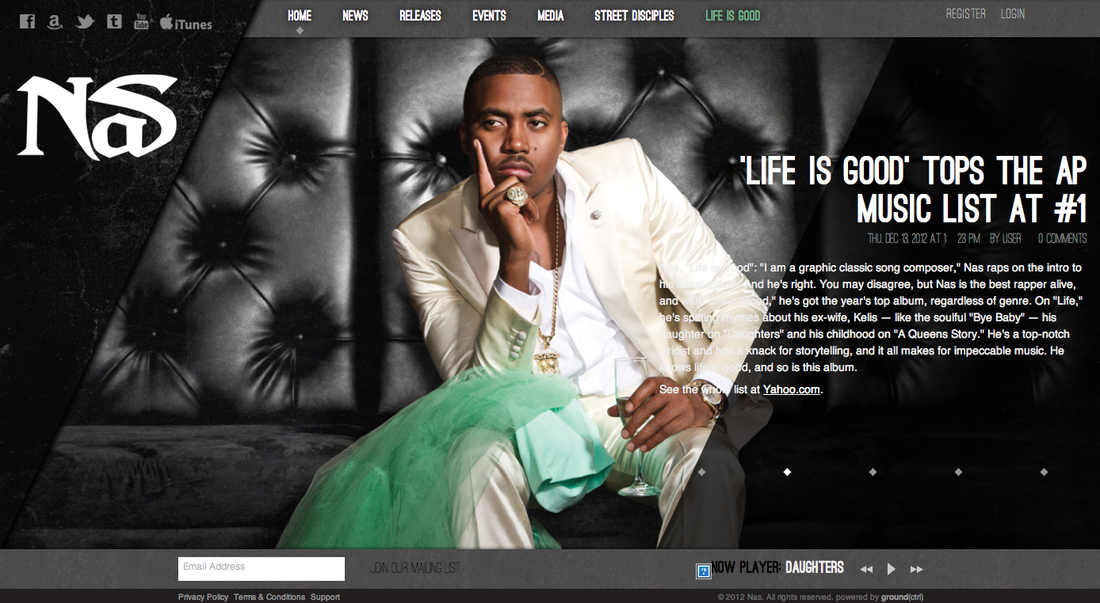 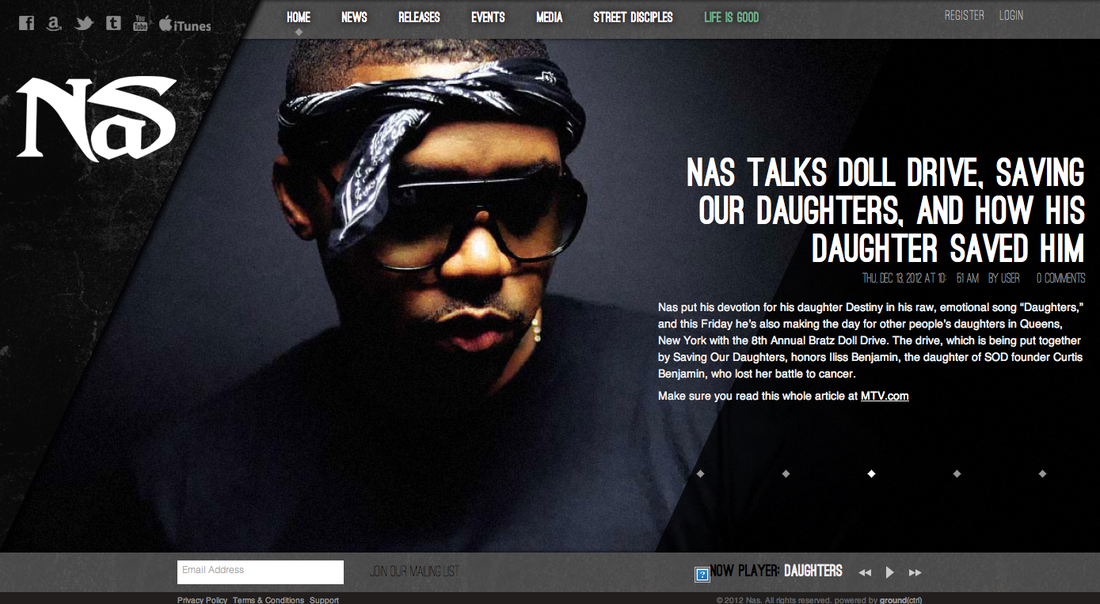 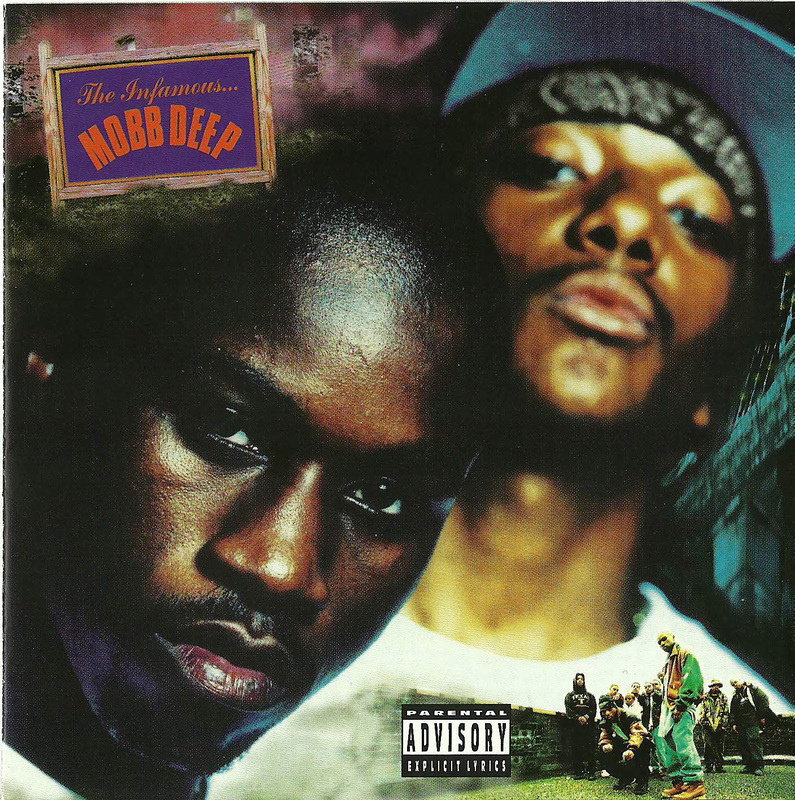 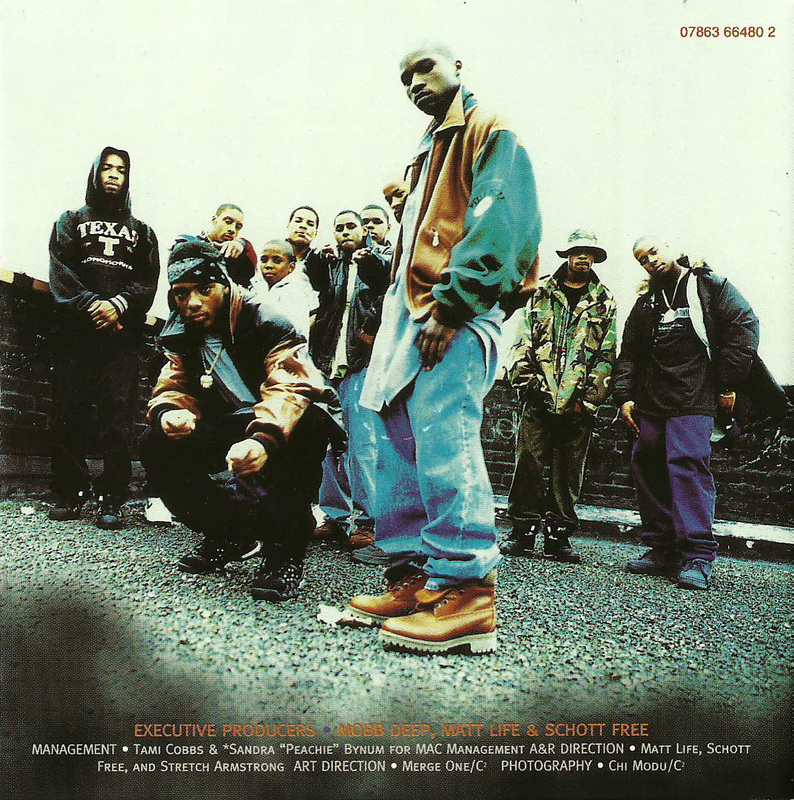 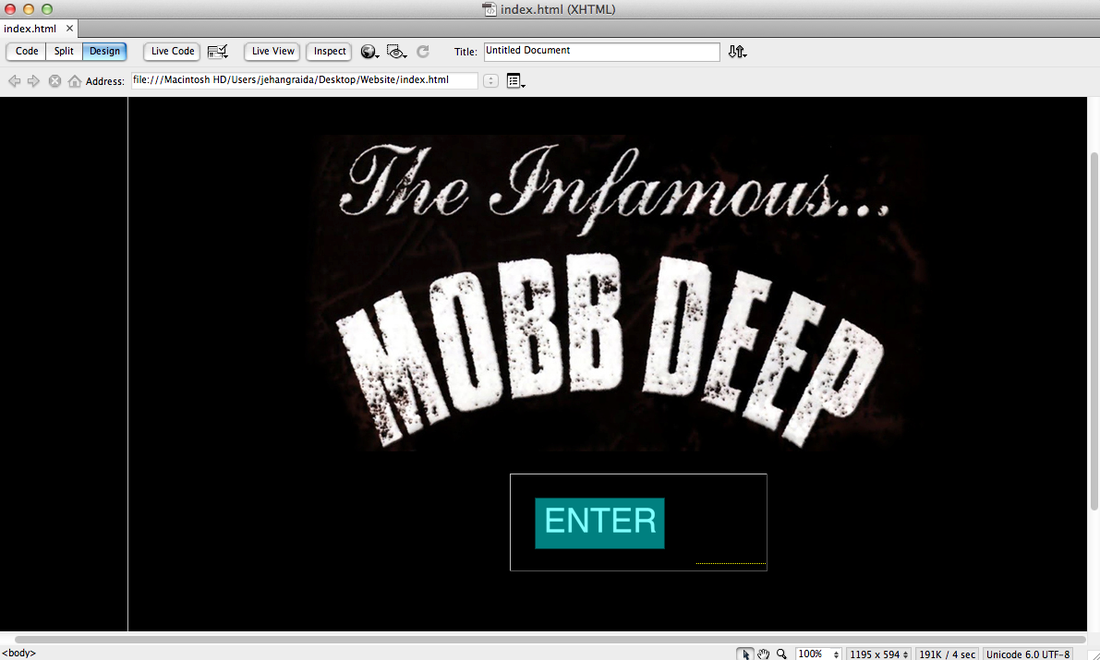 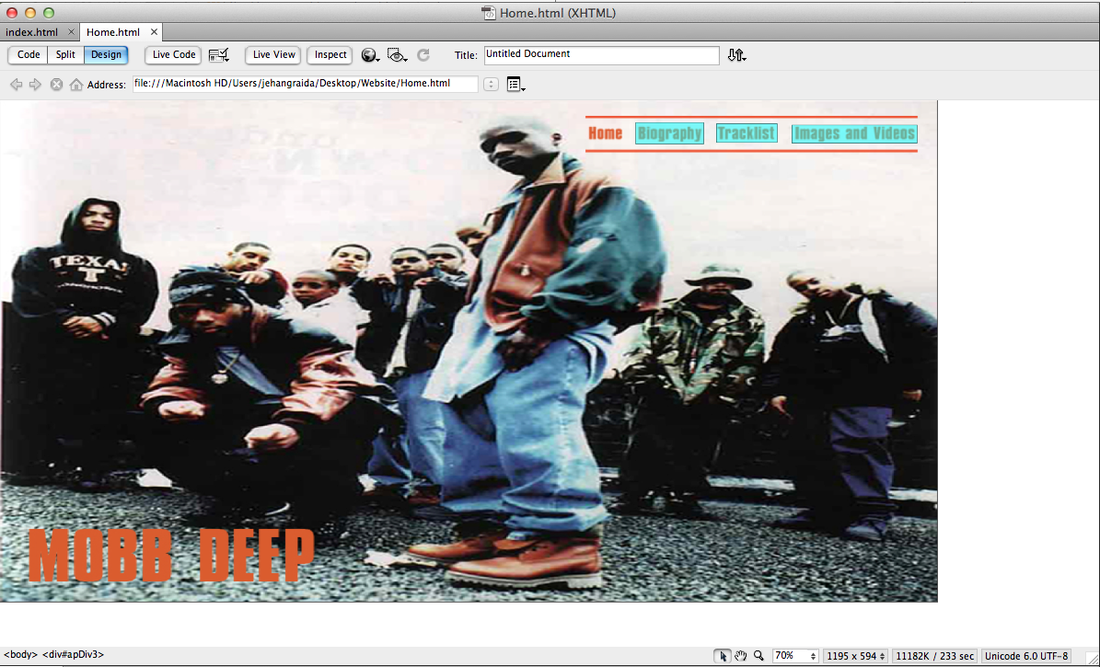 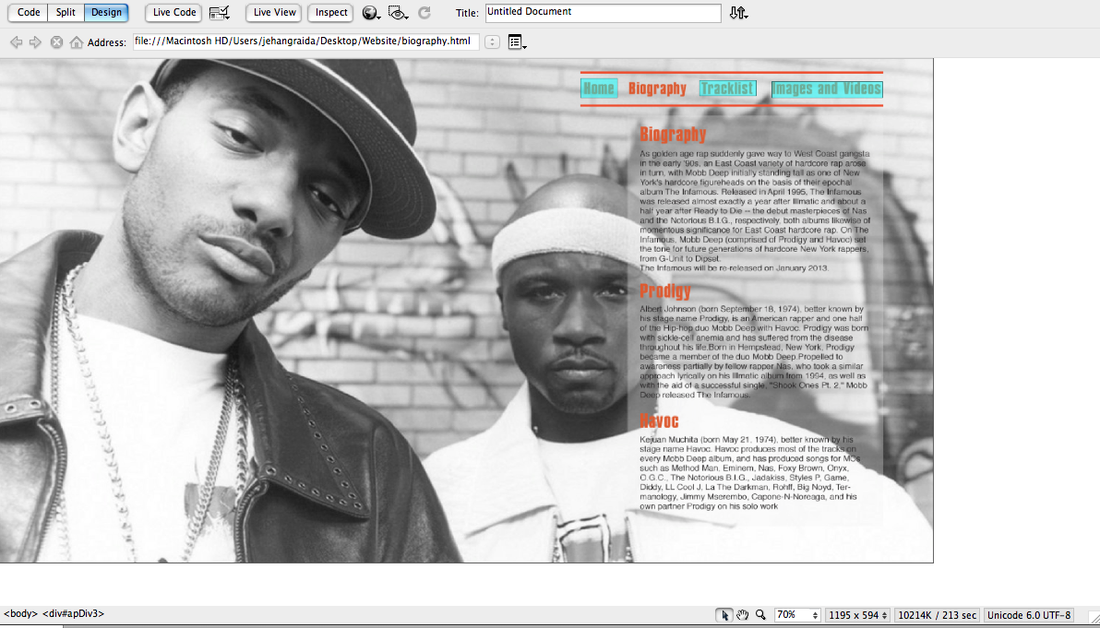 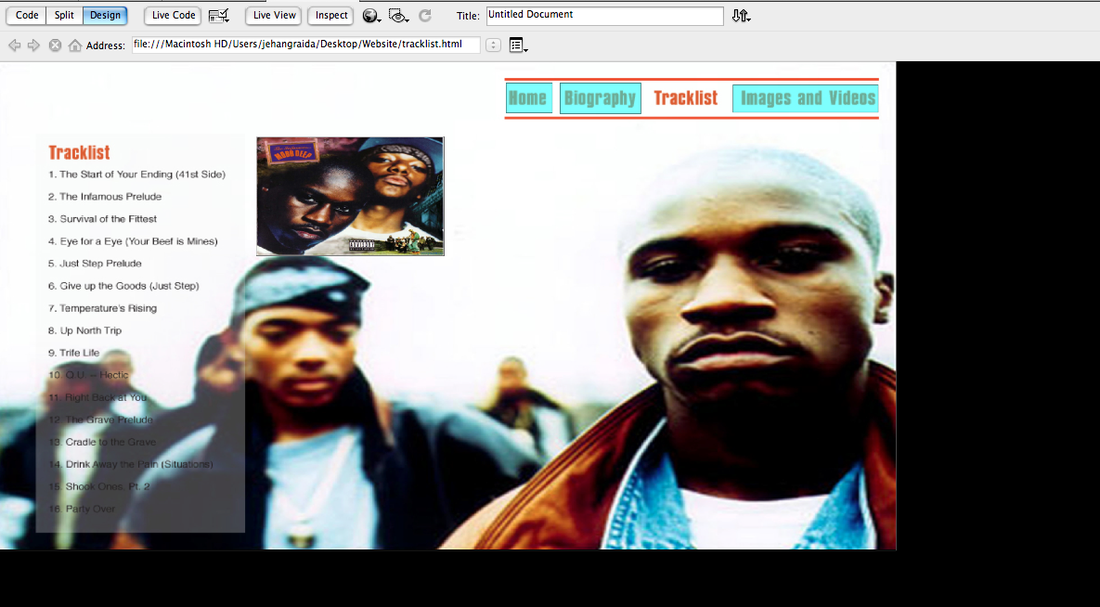 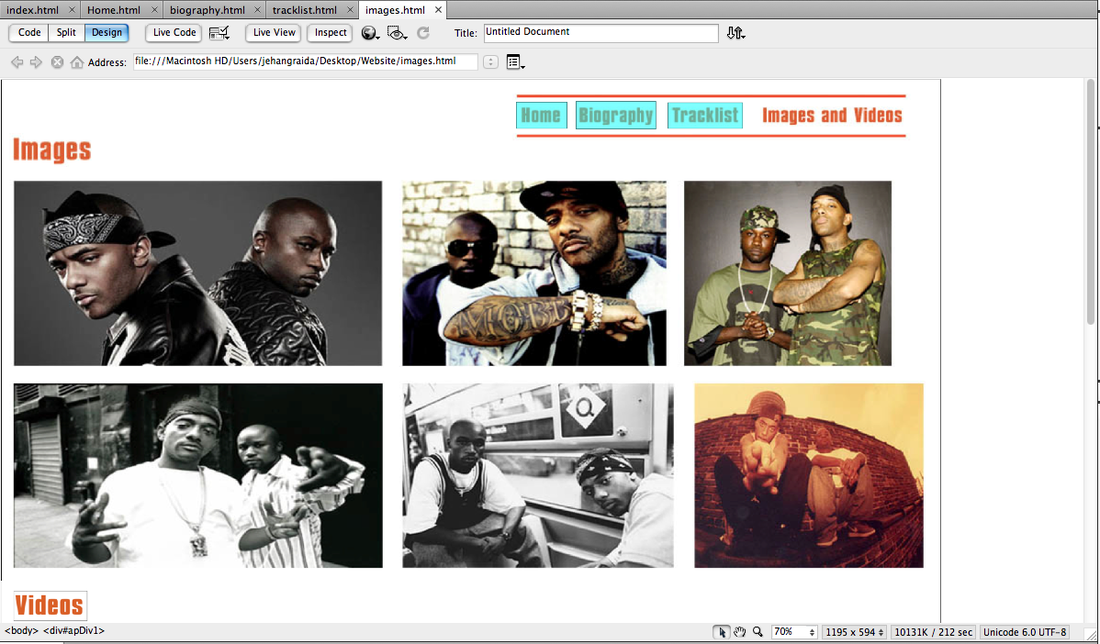 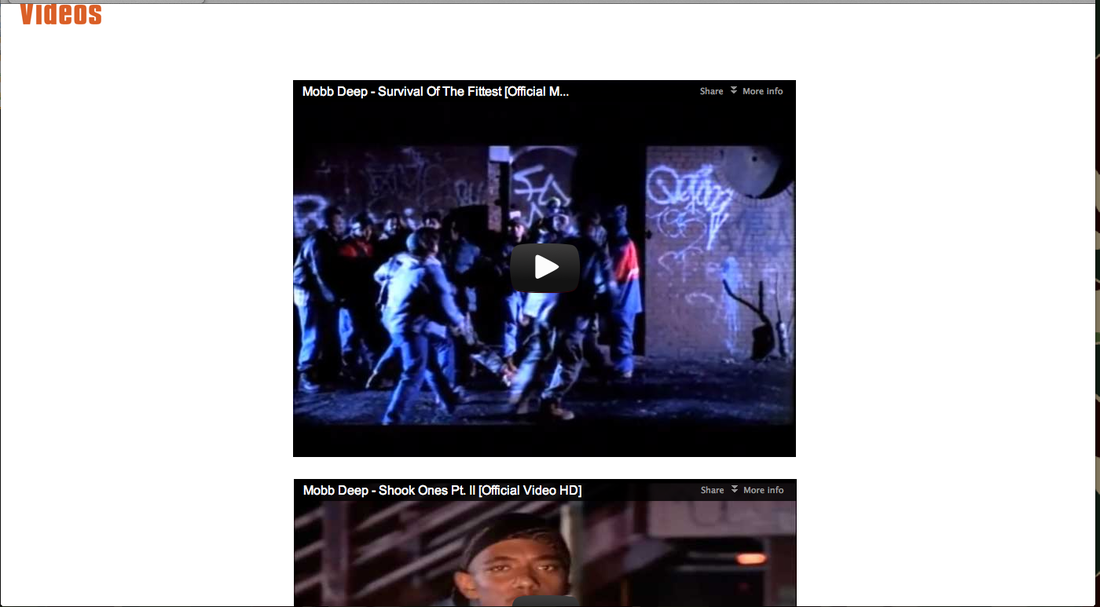 I have also used Youtube videos by embedding it into Dreamweaver.

For this project, we were asked to create a website of an album release for an artist and I have chosen Mobb Deep. I then scanned the album leaflet and got inspirations and try work from them. I didn't choose to create a website using the layouts from the scan because I thought they were too busy and I wanted a minimalistic feel and look to my website.

At first, I was confused about creating the pages, then I watched couple of Youtube videos and asked some of my peers to help me get my desired look. I then got the hang of it and started to enjoy doing the website. I kept the colour palette minimum and simple; black, white and orange. I got the orange for the album cover text. The font I used for the main text is Helvetica, I chose this because I thought it suited the site and it was readable and simple. For the headings and titles, I researched on the font used for the 'MOBB DEEP' logo and I found and downloaded the font Compacta ICG Bold. I created my pages using Photoshop and Illustrator. I used Photoshop for the images and layout of the pages. I used illustrator for all the text because I didn't want it to be pixelated if I done it on Photoshop. I then copied and pasted the text as a vector image from Illustrator to Photoshop and I put everything together in Photoshop.

Placing the images on Dreamweaver and getting the size right I found really tricky, I played around with the scale a lot to find the right size. I did this for all pages and found it very time consuming. For most pages, I put a plug-in for some background music. I thought it was good to put music in for the audience to hear some of their music from the album. I really liked the plug in as I think that it has a better feel to my site, if I didn't have the music I think my site would be really boring.

For my images and videos page, I wanted to have a plug in or a generator for an image slideshow, but I didn't know how to do this. So, I just put all the images together on the page using Photoshop to show the audience. This is my least favourite page as I find that it has no impact at all. If i knew how to create an image slideshow I think it would be so much better. The page I think is too plain and not interesting at all. What I did put in are Youtube videos, I watched many Youtube videos to learn this process. I embedded the video into my site using the link from Youtube. This was the only thing I think was successful on this site.

Overall, I really enjoyed this project as we had to create something for our chosen artist. I liked it because I had the freedom to do something I liked rather than be given an artist. I found creating the website really confusing and difficult at the beginning but got the hang of it. Using the codes was confusing at the start but remembered from using codes for Myspace before. If I had more time, I would learn how to create an image slideshow and made my site a lot better and more professional looking.